With Father at Birla House (my tribute to Mahatma Gandhi)

“Why was Bapuji killed?”

asked a little boy to his father, among the many on their visit to Birla House at Tees Janvari Marg. The vast stretch of experiences, ideologies and fragmented perspectives lay dry.

“Because Bapuji was a mirror. Haven’t we broken all those mirrors turned towards us?”

” poor Bapuji, he didn’t have any weapons with him, right papa?”

He asked again with a frown holding the toy gun close to his chest.

“no, son. Bapuji also had weapons with him. May be, they were more powerful than guns or swords. Unseen weapons are more powerful. Non-violence and satyagraha were no less weapons.But they are not the weapons for destruction. We feel they are destructive because of our polluted mind. That’s why we get provoked and keep shooting Bapuji. When you grow up, you may also be provoked and may kill Bapuji. Infact, we are not growing up we are getting more and more polluted.” 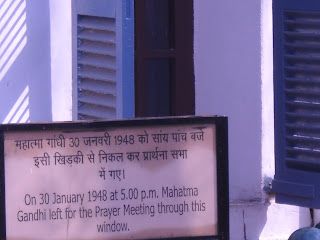 “Let it be anyone. Our own ego has killed Bapuji. Bapuji doesn’t die. This is not a memorial for Bapuji. But it is our own memorial. We are shooting ourselves, we don’t grow up at all, so, we are dead monuments. Bapuji lives on.” 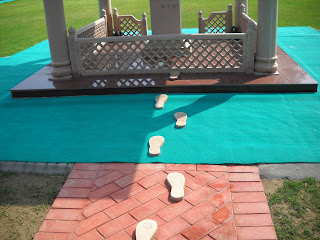 The cemented footprints of the father can be seen from his room to his death. 30th January evening wouldn’t have been so melodramatic as shown in   “Nine hours to Rama”. A great feeling or revelation to know that the father’s death was a simple event!!!!!

The breeze of his abstract presence blew over the pine and ashoka at Birla House.

The little boy jumped on the concrete footsteps unable to follow the words of his father.