Painting the Inner Space…..Landscape of the Soul

“I paint objects as I think them, not as I see them” -Picasso

The lesson “Landscape of the Soul” deals with a comparative study of European and Chinese paintings. It touches upon various subtleties of reality and art. Art is one of the forms of expression like poetry, music and dance. All these forms of expression have an abstract nature as they can’t be defined and have to be felt or experienced. The lesson has three important areas of discussion: anecdotes related to Chinese and European painting, Daoism and how one of the philosophical doctrines of Daoism called “Shanshui” is reflected in Chinese paintings. The lesson starts with an anecdote related to Chinese painting where an emperor commissions a painter named Wu Daozi to paint a landscape. Once the painting is ready, the emperor is invited and he appreciates the painting looking at the forests, high mountains, waterfall, clouds and men on hilly paths, birds in flight etc. in the painting. The painter is not satisfied and he invites the attention of the emperor towards a cave in the painting inside which he says dwells a spirit. The painter claps his hands and the entrance to the cave opens. The painter says, “The inside is splendid, beyond anything words can convey. Please let me show your Majesty the way”. The painter enters the cave and disappears. The painting too disappears from the palace wall. What does this tale mean?

Such tales were very common in China’s classical education. It was through such stories great masters made abstract concepts concrete. Such tales reveal that art has an inner life, meaning or soul. Only when one is able to see that inner life, one can understand its true meaning. The emperor had appreciated the painting only from the outer, the external. He could see the body of the painting whereas the painter showed him the soul, the inner life and meaning of the painting. Art and artist are one. Creator and creation are one and there can be no separation. Once a master was asked by a disciple, “Where has the creator gone after creating all these?” The master replied, “The creator is inside the creation”. Chinese paintings are based on the philosophy of Daoism. Dao means “path or way”-the way into the mystery of the universe. The emperor may rule over territories, but the artist alone knows the way within. Life makes no meaning unless we undertake the inner, spiritual journey. It is said “Those who look out dream, those who look in wake up”. When Wu Daozi said, “let me show you the way”, he meant the way to the inner meaning of art or mystery of the universe. This is the spirit of Chinese paintings. They do not reproduce an actual view, but uses a real landscape to say something more. A Chinese painter, therefore, wants the viewer to take plural view points to enter into his painting and travel in it. He wants our active participation, not only physical but mental. His landscape is not a copy of a real landscape; it is a representation of an inner reality, a spiritual and conceptual space. According to Daoism, this universe is composed of two complementary poles, viz. Yin (feminine) and Yang (masculine). The interaction of these two energies makes the universe. Their meeting point too holds great significance though often overlooked. In Daoism, Landscape is called “Shanshui” (Shan-mountain, Shui-water) but it doesn’t represent a real landscape but the Daoist view of the universe. To understand Chinese paintings, one must understand Daoism. A Chinese landscape is based on the philosophical doctrines of Daoism. So, the mountains and water in the Chinese painting is representative of Shanshui and the unpainted space is representative of the middle void where the interaction between Yin and Yang takes place. Man is the medium of communication between the two complementary poles of the universe and you can see his presence too in the Chinese paintings. 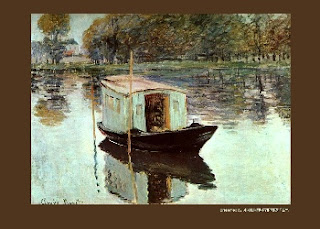 European paintings follow delicate realism by reproducing an actual view of realtiy. The more close it is to the real, the better. The landscape in a European painting is a copy of the real landscape. It doesn’t represent an inner reality or meaning. It tries for an illusionistic likeness with the real. A European painter wants the viewer to choose a single view point and it requires no active mental participation of the viewer.

The tales related to European paintings reveal it clearly. In the story of Quinten Metsys, the painting was appreciated as the fly on the panel looked exactly like a real one. The same holds good for the story about the frightening likeness of a dragon to the real which repelled the painter himself from drawing its eye.