The RAGAS that healed

Krishna, the mind is restless, turbulent, powerful, and violent; trying to control it is like trying to tame the mighty wind.
The evening breeze blew over me at the Bay of Bengal shore without easing the troubled waters within. Mind is no less an ocean, always throwing thoughts to the shores. The “pensive boy” called by Dr. Natarajan, I have been seeking a shore for long to unburden myself. With the shipwrecks of many dreams, ideals and expectations, I longed for a life boat of loyalty and genuine commitment. A friend who you trust completely betrays you, an innocent gesture of pure love gets crushed by a conniving mind and turns out to be a feast for your own friends!!! You are asked to give an explanation for your innocence!!! Can there be anything more absurd than that??! I feel, the toughest ordeal is to prove you are innocent rather than guilty. You are caught in a quagmire of vicious minds and left without a hand to hold.
Though Bay of Bengal has only sunrise, I found the boats afloat like islands of melancholy. The view from the classroom windows, the corridors. True, I was also becoming an island, the sand receding day by day. I remember a French man daring the waves on an evening scaring us. Back shore he burst into tears for a domestic discord, defeated, forsaken. The waves of life are such they can carry you ashore alive or dead. My token for her, a peacock plume must have reached some shore, or caught in the submerged ruins of Dwarka. 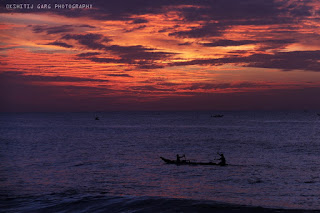 When you are jilted and betrayed, you feel no less than being raped and looted. Love is an extension of one’s being, the life energy and when it returns unreciprocated, it hits you hard, lashes at you and you become too weak and fragile to receive and carry it. A storm brews within and you are spaced out and timed out.
My love is a shipwreck in the Bay of Bengal…..(i wrote in my diary)
Depression flows through you like blood. Everytime I wanted to stand up, pull up my sleeves I couldn’t. I was broken, heart torn asunder. Lying on the sands of the beach listening to the gentle fall of the waves, I spent nights. That’s when I started loving darkness. There is a security and comfort in darkness as if you still have many things to cling to. Light is like revealing it all at once, making you bare and plain. The starry sky was like a perforated sheet beyond which is an infinite roof of bright light.
A child once asked me pointing to the half moon,
“Why is it half bright?”
“Because we are somewhere in the other half of darkness” I said.
Pain unless finds an expression can consume you completely. I was yearning desperately for that expression. Everything around seemed an empty ritual. Mornings were blank and numb, evenings heavy with loneliness.
The devotion-soaked voice welcoming Krishna, “Swagatam Krishna…sharanagatam Krishna” from a cassette ROCK TO RAGAS reached me out of the blue. There was something mesmerizing and soothing about the voice and the melody in the song and in all other songs from the album that slowly pulled me up and made me stand. Then on, I walked with it, slept with it, ate, lived and died in it. Time revealed that I had lost an irksome baggage. I felt light and refreshed. http://www.youtube.com/watch?v=CHg3uEn3ssc
Healing is not about forgetting a nibbling memory but about flushing it out of your system. It gave me new energy and peace. I felt as if my bowels were emptied after a tough spell. If you ask me what is Music for you, I would say,
“I am sick without music”.
The ‘pensive’ boy slowly learnt to sieve his thoughts through his pen and found it his blissful solitude. Years later a student of mine brought me a cd of ROCK TO RAGAS since cassettes had gone out of market. The search for the singers KRISHNAKUMAR and NAVEEN continued. A phone conversation with the famous playback singer Sri Madhu Balakrishnan, brother-in-law of cricketer Srisanth, guided me to the singer, Sri Trivandrum Krishnakumar. Though Krishnakumar had no information about Naveen, to my surprise, he revealed that ROCK TO RAGAS has been used for healing by many physicians!!! 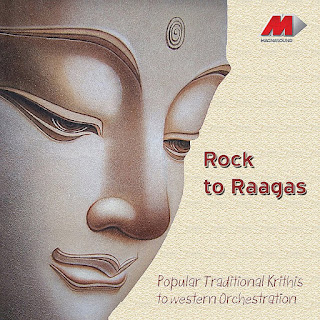 Social
Locating the Centre of Violence: The Essential Step