CAPTURING THE PRESENT MOMENT My insights on Shirley Toulson’s poem

The poem in three stanzas talks about how moments are captured, preserved and have to be lived.
What is a Photograph? a moment captured. Why do we capture moments? Because we know that once gone they never return, we can only keep them in our memory. Photograph is one of the ways to do that. The poem is so beautiful for its philosophical undercurrents and brevity of expression.
Life is composed of fleeting moments. The speaker’s mother in the poem used to laugh at one such lost moment in her life when she was twelve years old and went for a sea holiday with her cousins and the uncle captured that beautiful moment at the beach with the sea behind them. After the mother’s death when the speaker looks at the photograph, she remembers her lost moments with her mother.Her mother is no more and she finds the present moment so much alive and profound that she becomes silent about it. All the while in the poem she has been talking about the past and when it comes to the present she becomes silent. What can we say about the present moment? Nothing. If you try to define it, understand it or talk about it, it passes. But we can easily talk about a past moment, define it, try to understand it or name it. But the only way to understand the present moment is to be with it, to live it.
The speaker purposefully mentions the photograph as “cardboard” in the first line of the poem as it is a mere object when looked at from a distance but as you go into the moment in it, it becomes more than an object, life itself.
When the speaker says, “the sea which appears to have changed less” there is a hint that everything else in the photograph has undergone change, meaning the people in the photograph. Life is a series of changes staged against the backdrop of Nature. It’s not the feet that is transient but the moment. Moments will be lost in the tides of time. Meeting and parting happen once in the vast, infinite expanse of time.
—Santhosh Kumar Kana
Here is the poem: A PHOTOGRAPH The cardboard shows me how it was When the two girl cousins went paddling Each one holding one of my mother’s hands, And she the big girl – some twelve years or so. All three stood still to smile through their hair At the uncle with the camera, A sweet face My mother’s, that was before I was born And the sea, which appears to have changed less Washed their terribly transient feet. Some twenty- thirty- years later She’d laugh at the snapshot. “See Betty And Dolly,” she’d say, “and look how they Dressed us for the beach.” The sea holiday was her past, mine is her laughter. Both wry With the laboured ease of loss. Now she’s has been dead nearly as many years As that girl lived. And of this circumstance There is nothing to say at all, Its silence silences.                 BY SHIRLEY TOULSON 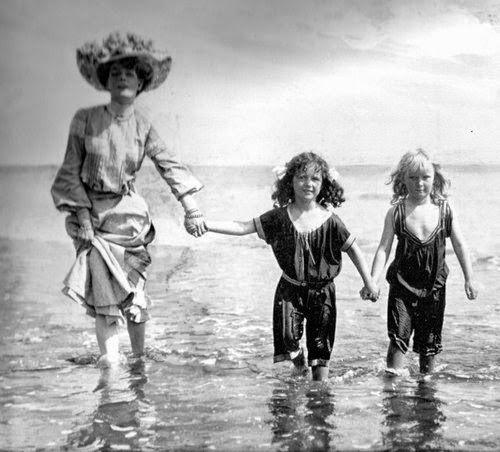