From an invigilator’s diary
Examination, if I were asked to define, is the interim between preparation and evaluation. 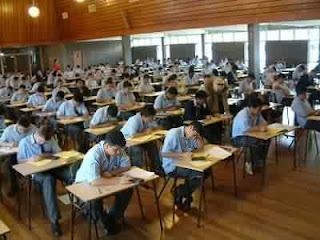 Though between the pen and the paper, it has more to that inking process. How thoughts and ideas take graphic shape flowing from the brain through the veins to the finger tips and then on to the paper!!
Each one displays characteristic behavior and posture in those 2 to 3 hours.
Some erect and silent. No expression. Only the pen moves. “nature takes the pen from me and writes” kind of Wordsworths. 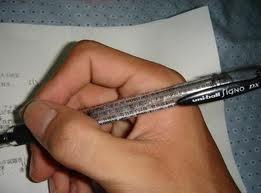 Some buried in the paper hardly raising their head, hardly aware of what happens around. They may be conversing with the paper they write on.
Some reclining, putting their weight on their elbows and giving a side profile as if watching what the hand writes.
Some specky ones, raising their eyebrows or at times peeping through the specks on the tip of their nose.
Some, the eccentric but intelligent, given to sudden shifts of head or shoulder, biting the pen tip or smiling to themselves. At times dropping the pen and resting on the paper as if in total surrender. Before they appear to you to have lost interest in writing, they burst or surge up and continue as if a fountain is turned on.
Some with their heads on the palms as if cursing the paper or regretting a lack of preparation or hardwork.
Some looking or staring blankly at you, the invigilator. Remember, their thoughts are somewhere. They are groping in the dark for a clue. Fumbling for a word that would unloose a bundle of points for the answer.
But the ones who stare at you at regular intervals are into some malpractice….. remember.
Some staring out through the window as if awaiting a far off inspiration for the pen to continue.
Some, the well equipped, well prepared studious ones happily treading through unaffected. The face says it all. The water bottle, scale, eraser all ready on the desk, following instructions promptly from bell to bell.
Some always asking it for the washroom to come back refreshed. If their shoes don’t carry water drops, you can find it in the washroom later, the paper shreds, littered confetti.
Some exchanging glances, and smiles.
A few pacing up as and when someone demands an extra sheet. Some demanding extra sheets making others count the plenty of pages left and wonder. A few may have a question in their mind, “hope you are writing on both sides of the paper!!!!” it is like a reminder for them of their own slow pace or waning stuff.
Some getting up at regular intervals to clarify a doubt on the question paper, quite often silly ones or asked to the wrong subject teacher as invigilator.
Some with previous paper’s hangover whereas some worried about the next paper.
Some suppressing the enthusiasm for a few more minutes to burst for having finished all the papers. Some cursing the hours to run like seconds without having much to do. They, from the beginning bell, develop no attachment with the paper.
Some affected by the invigilator watching over them.  Then pen that moves in a flow comes to sudden halt. Once the invigilator moves, it gets back the lost flow. 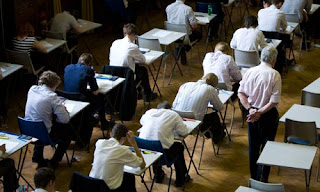 Some pointing out silly errors(spelling) in the question paper which others have already noticed and understood but felt like giving no time for small things. The error pointer gets a laugh and a sarcastic scorn from others.
Some sighing relief when the strict invigilator is relieved by a liberal one.
Some creative invigilator bored by this most monotonous job imagines many funny caricatures and gets amused, like the instructions akin to “passengers your attention please, final call for…..” or “extra sheets, extra sheets…” like a street vendor!!!!. A Shakespearean comic relief!!
Some moving the desks in their frequent twists and turns. I feel many behave like when asleep…scratching their head, turning and twisting.
Some digging their nostrils and when noticed drops the one that they so meticulously rolled out.
Some waiting for the invigilator to indulge in a brief chat with someone at the door or a circular to sign on and they burst into discussion. The distant ones using sign language to their best.
Weather and season also play on their behaviour. A hot summer with no power, you find them sweating it out literally and metaphorically. Some sneezing, some with a running nose with an inhaling sound heard at intervals, some blowing it all on the kerchief. Some coughing frequently and others frowning at. Some leaving a stink silently, spreading giggles all over. Some making it audible too and the giggles burst out into peals of laughter. The gloomy winters-all wrapped up, only the bright eyes seen peeping out. 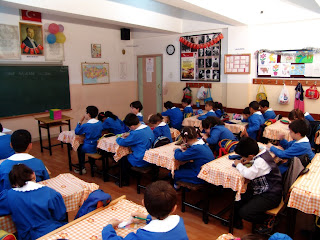 And then the last minute request for an extra minute. Some suddenly flooding with ideas begging for a few more minutes. Then the usual chats outside about the paper.
An exam is made of all these.
This is how our new generation carves out their future. Don’t miss them at work. Be vigilant, they are at work.